The first Europeans to enter what was to become Jefferson County were the members of Panfilo de Narvaez's expedition. They passed through an Apalachee town in 1528. In the 17th century, the Franciscans administered five missions in the county along an east-west line near what would become U.S. Highway 27. These missions were destroyed at the beginning of the 18th century by the English governor of South Carolina in retaliation against Spanish depredations. When American settlers entered the county in the 19th century, the land was occupied not by the Apalachees, who had been dispersed when the missions were abandoned, but by Miccosukees, a branch of the Creeks who became part of the Seminole group.

Florida was ceded by Spain to America in 1818. Settlement of Jefferson County was spurred both by its proximity to Tallahassee, the newly selected capital, and by the suitability of its soil for cotton cultivation. Early settlers bought large tracts of virgin forest, or, if they could, the old fields of the Indians. They cleared this land to plant cotton.

Jefferson County was separated from Leon County in 1827. The county, named for Thomas Jefferson, was established January 6, 182 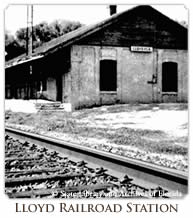 7. Monticello, named for Jefferson's Virginia home, was named county seat before statehood, while Florida was a territory of the United States. Monticello remains the county's only incorporated city. Robison's Post Office was named its county seat, superseding the older settlement of Waukeenah. The county seat was soon renamed Monticello. The county quickly acquired its first school, the Jefferson Academy, and a courthouse. Its prosperity suffered in the late 1830's when many of the settlers went to fight in the Seminole War. The failure of the Union Bank in Tallahassee also affected the county. In the 1850's, county residents who had been endeavoring to make the Wacissa and Aucilla Rivers navigable by canals adopted the railroad instead as their means of transportation. The arrival of the train at Station Number Two signaled the birth of Lloyd, which prospered with the railroads until the 1930's. The railroad also gave a boost to Aucilla, but Monticello was left stranded three miles north of the main track.